Program helps those interested in working in health care 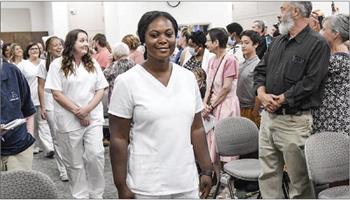 Gretchen Heintzelman's plans for a nursing career got off track but a free program offered by the Central Susquehanna Intermediate Unit put her back on course and today the Lewisburg resident is employed as a registered nurse.

Heintzelman, 34, is among 1,378 participants in the CSIU’s federally-funded Work Attributes Toward Careers in Health (WATCH) Project which helps income-eligible individuals interested in working in the health care field as a direct care worker (DCW), certified nursing assistant, licensed practical nurse, phlebotomist or registered nurse by providing training, financial assistance and other resources.

Of the participants, 1,131 individuals have completed training in the past decade, said Katherine Vastine, WATCH Project program manager.

DCW Heroes is another program offered by the CSIU to retain or bring people into the health care field. Launched in January with a $1.2 million state grant to serve several counties, including Northumberland, Snyder and Union and Montour, it is available to people in the field who need extra support, individuals with disabilities, who speak English as a second language or have low literacy or technical skills.

To date, the program has 29 participants from 11 counties, program manager Kerri Kubalak said.

The two programs are vital to getting more people working in nursing home and adult care settings at a time when the industry is experiencing a 44 percent to 65 percent turnover rate and is critically lacking in direct-care workers, said Linda Walker, a CSIU healthcare education coordinator.

“One of the complaints that these workers have is they don’t have the training,” she said.

The state requires certified nurse aides to have 12 hours of in-service training each year, Walker said, but there’s no mandatory ongoing training or other support.

WATCH Project and DCW Heroes provides that training and support free of charge to eligible participants and is '‘giving them the confidence that they are valuable,” she said.

Every WATCH Project participant is paired with a career coordinator and usually starts in an entry-level position “to expose them to the sights, smells and sounds” of working in health care, Vastine said. “They learn pretty early on if this is a career for them.”

Heintzelman had always wanted to work in the medical field. “I loved working with people in general,” she said.

In 2013, the same year she gave birth to her first child, Heintzelman enrolled in the WATCH Project program where she started off as a certified nurse aide in a Valley nursing home.

Through the program, Heintzelman received training, new uniforms, textbooks, mileage reimbursement and assistance in applying for loans and grants.

“They made it possible. I had somebody to walk me through the process,” she said.

Kubalak worked for 4 1/2 years as a career coach in the program and had weekly contact with individuals like Heintzelman.

“Everyone’s needs are different,” she said of how she connected some participants with child care subsidies and found housing for homeless participants. “It’s hard to go into training when you’re worried about where you’re living.”

Heintzelman stayed with the program for several years as she advanced in her studies, later receiving her licensed practical nurse certification. In 2019, she became a registered nurse and today is employed at the Selinsgrove Center.

“I was connected with so many resources and peer support groups. Other RNs and LPNs cheered us on,” she said.

“Entry-level positions won't always offer life-sustaining wages,” she said. “Our goal is to advance them on the career ladder.”